Decentralized protocols require governance filled with a diverse array of stakeholder voices. When a single founder, company, or investor unilaterally determines the outcome of governance decision making, then that protocol has failed at being decentralized.

GFX Labs has participated in some of the largest decentralized governances in DeFi: Compound, Uniswap, MakerDAO, and Optimism. We understand acutely the importance of a protocol avoiding capture by a single party.

To ensure that Interest Protocol is always governed independently and in a decentralized fashion, GFX Labs is pleased to announce that it will delegate most or all of the voting power it controls. Not only that, GFX Labs will do it in an unbiased, permissionless manner. 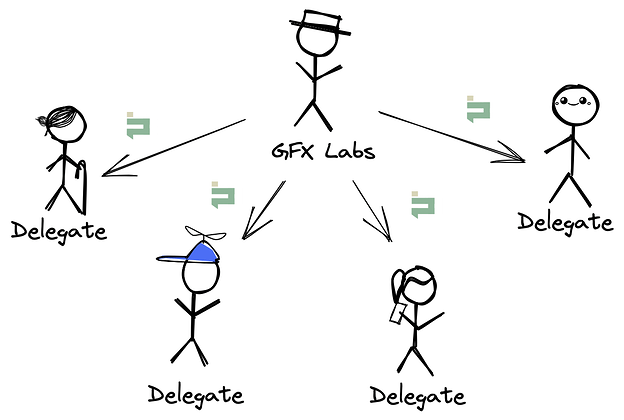 Governance of Interest Protocol requires a high threshold of voting power to make and approve proposals. This is to preserve the security of the protocol and protect users. It does limit, however, the ability for governance to be decentralized in decision making at this early stage.

To ensure that decentralized governance takes place, GFX Labs will be launching a permissionless delegation program with its own IPT. GFX Labs will delegate large amounts of IPT for the foreseeable future, and unlike at many major protocols, it will do so in an unbiased fashion to ensure that GFX’s views and opinions do not dominate governance simply because of our ability to delegate.

Organic IPT: IPT that is held directly by a tokenholder, or delegated to that tokenholder, but excluding any IPT voting rights delegated by GFX Labs.

Measurement date: The last calendar day of the month (UTC).

O = Delegate’s organic IPT on the most recent measurement date

Delegation will be made first to the largest address, and continued until 20 addresses have received delegation. A maximum cap of 500,000 IPT of voting rights will be delegated to any eligible tokenholder.

Example: If Eligible Tokenholder Janet has 12,000 IPT owned or delegated to her by sources other than GFX Labs and GFX Labs still has undelegated IPT, then she would receive 48,000 IPT of voting rights in delegation.

Example: If Eligible Tokenholder Bill has 1,500,00 IPT owned or delegated by sources other than GFX Labs and GFX Labs still has undelegated IPT, then he would receive 500,000 IPT of voting rights in delegation. This is because the multiplier would be in excess of the maximum delegation.

Exclusions
GFX Labs may, at its discretion, exclude addresses for any reason, but if it does so, it will communicate the reason to that address if the owner is known.

Employees of GFX Labs are excluded from this program.

Addresses that GFX Labs has reason to believe are controlled by a common owner will be excluded (except the largest one).

Eligible tokenholders with a history of material, undisclosed conflicts of interest (e.g. profiting from a proposal and not disclosing that fact) will be excluded.

Disclaimer: GFX Labs may alter its policies on delegation. This program does not represent a binding commitment to delegate voting rights to any particular party for any particular period of time.